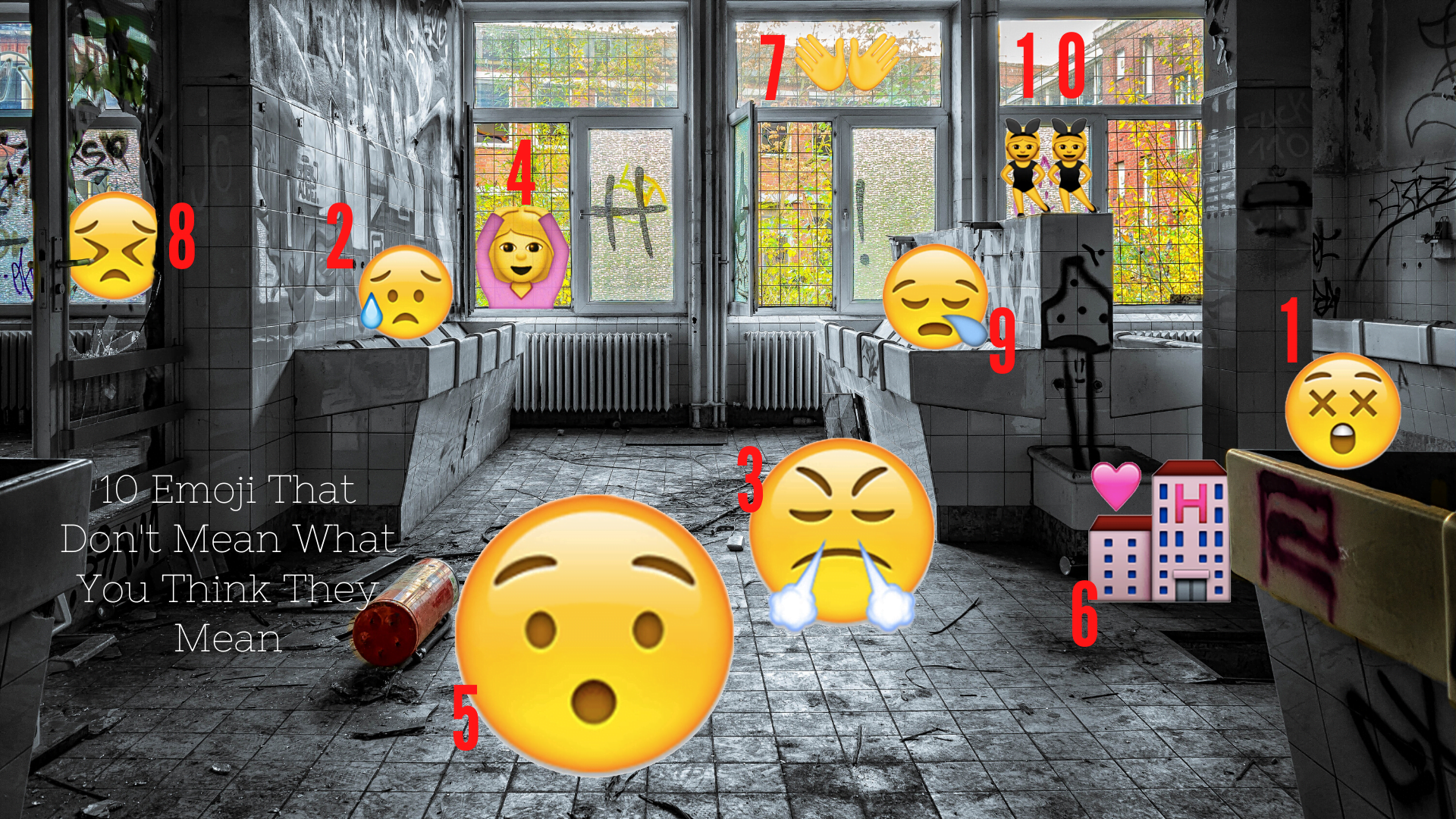 The use of Emoji in marketing needs to be carefully understood to avoid embarrassing or expensive situations!

July 17th 2020 is World Emoji Day. This is a complex and often misinterpreted branch of visual communications. But it deserves to be celebrated! We have decided to put a Ludejo Limelight on a few of the most commonly misused Emoji. We are not going to be looking at the “creative” appropriation of vegetable and fruit emoji.

I have one friend who uses a Nokia 3210 brick with *both* phone and text functions; but other than him, I expect that everyone in my contact list uses some variety of smartphone. Whether you use Messenger or prefer to stick to basic text or WhatsApp, you will no doubt have used an Emoji or two. But are you using them correctly? The specific meanings of certain Emoji can elude even the most Snapchat-savvy among us.

Before we get to the list, it’s important to understand something about Emoji. They don’t just *appear*. Their development and use across platforms are overseen by The Unicode Consortium. The Unicode Consortium coordinates the development of the Unicode standard. They are responsible for the character encoding that makes it possible to use emoji across operating systems, has a few words to say about emoji meanings on its website. The organisation explains in its FAQ’s that emoji meanings “may vary depending on language, culture, and context.” Additionally, the Unicode character name is a unique identifier for each emoji, but it “may not encompass all the possible meanings of an emoji character, and in some cases may even be misleading.”

Emoji are pictographs (pictorial symbols) that are typically presented in a colourful form and used inline in text. They represent things such as faces, weather, vehicles and buildings, food and drink, animals and plants, or icons that represent emotions, feelings, or activities.  To the computer they are simply another character, but people send each other billions of emoji every day to express love, thanks, congratulations, or any number of a growing set of ideas.

The Unicode Consortium solicits proposals from the public for which new emoji should be considered for inclusion in the standard. Among the most recent additions are the “Sloth”, the “Otter” and “Waffles”.

The Unicode Consortium* helpfully have database of each Emoji with their official name attached.

We have placed 10 of the most commonly misused Emoji in the image above.

So, I really hope I wasn’t the only person to assume that this emoji with “X”s for eyes is dead. The character is actually an “astonished face”. Which makes it the perfect emoji to use the next time you need a symbol to show how surprised you are… although it’s really hard to get away from the feeling it’s dead.  Another X-eyed emoji to look out for? The “dizzy face,” which looks just like the astonished face except without the upper teeth visible in the open mouth.

At first glance, this doesn’t seem like a character for which there’d be a multitude of potential emoji meanings. It seems like the right face to use when you’re talking about being sad or crying over something that’s going on. But it’s actually intended as a “disappointed but relieved face” — a pretty specific mix of emotions for a single emoji. You might begin to see a pattern in this regard!

3. Face with look of triumph

If you’ve been using this symbol to convey the fact that you’re angry, even fuming, you’re not the only one. However, we have been misconstruing the official emoji meaning. This is actually a triumphant face — but we’re willing to bet that it’s one of the most commonly misunderstood faces in the current emoji canon. It reminds lots of people of a bull blowing steam out of his nostrils, which probably explains why we’ve all been using it wrong. Now that I have had the record corrected for myself, I can’t help but feel there is a rather dramatic level of passive aggression extruding from this emoji. It’s “triumphant but f**k you too”.

I have to be honest; this isn’t an Emoji I had put any thought into before compiling this list. I kind of assumed it was a girl pretending to be a dancer or ballerina. So I found it quite interesting to see that this Emoji has a very specific meaning for Japanese people. This Emoji is intended as an “Okay” symbol, and shows a girl making an “Okay” sign by creating an “O” shape with her arms, which is a Japanese gesture.

Now that I’ve focused on her arms for so long, I think she looks like a person with short limbs making the “M” from “Y.M.C.A.” and I can’t un-see that…

This one, to me at least, was very straight forward. It’s a symbol which shows surprise. Right? At least that’s how I’ve been using it. A lot. It’s in my top 5 Emoji’s… and I now I find out it actually means a hushed face and is meant to represent someone who is being quiet. I feel like I’m missing something. How is that not surprise…?

This is another one I had not paid any attention to. Most of the buildings are generally ignored by me, but I can understand why people would interpret this as being a pink hospital (with the “H” and the heart…). In fact, I checked with a few people and “maternity hospital” seemed to be the consensus… but they are oh so wrong. The truth behind this emoji is a little more scandalous; it’s actually a wonderfully euphemistically names “Love hotel”. Which I am reliably informed is a hotel which rents the rooms by the hour, where you can check in with your lover, and then leave shortly afterwards… *misused hush face emoji*

This is one of the more confusing emojis when it comes to hand gestures. Most people use it to show that they’re above a task or are dismissing something (or someone). But the symbol was originally intended to represent openness, or even a hug. Not exactly what you’d expect based on the way your friends have been using this emoji. Another Emoji to check out is the guy with hands in front of him just like this! Apparently, he wants a hug as well…!

If you’re like most people, this is probably one of the emoji you turn to when you want to convey that you’ve had a rough day (or week) and are ready to throw in the towel on all of the things you’ve been trying to accomplish against insurmountable odds. But in reality, the original meaning of this symbol is the “persevering face,” which indicates that this little character may have more determination or just plain endurance than the rest of us.

Most people assume that this is one of several characters meant to express sadness. But it’s one of the more confusing symbols as far as emoji meanings go. This is actually a sleepy face, and that water droplet isn’t a tear; it’s a meant to represent drool. (That means that if you’ve been interpreting the water droplet as snot and using this symbol to complain about having a cold or allergies, you’re misusing this emoji, too.) In fact, Megan Logan reports for Wired that the “nasal bubble” comes from “popular anime/manga iconography that denotes sleep.”

The emoji showing two women wearing bunny ears is one that plenty of friends have used to show that they’re happy or that they’re looking forward to a night out together. But this emoji was actually intended to represent the Bunny Girl, a subservient Japanese symbol that’s associated with sex appeal and is popular in fetish cosplay. Which means that if you’ve been thinking emoji meanings like dancing girls, tap dancing girls, or even ballet dancing girls are correct, you might be surprised… *misused hush face emoji*

And just so you know, this list of 10 is barely scraping the surface of our current misunderstanding, all from a Western POV. If you are creating a promotional campaign for your product or service anywhere in the world, and you want to include an Emoji or two (regardless of how social media savvy you might think you are), it really can’t hurt to have a localization specialist check your symbols and texts for hidden meanings. It might save you a lot of unnecessary embarrassment!

If you want to read more another visual form of viral marketing, check out our blog on memes!

Thanks for reading! *misused high-five/prayer Emoji*

*(The conspiratorial part of my brain is having difficulty shaking the thought that they are a Spectre-type organisation plotting to out-wit an ageing Bond with colourful symbols and hieroglyphs!)