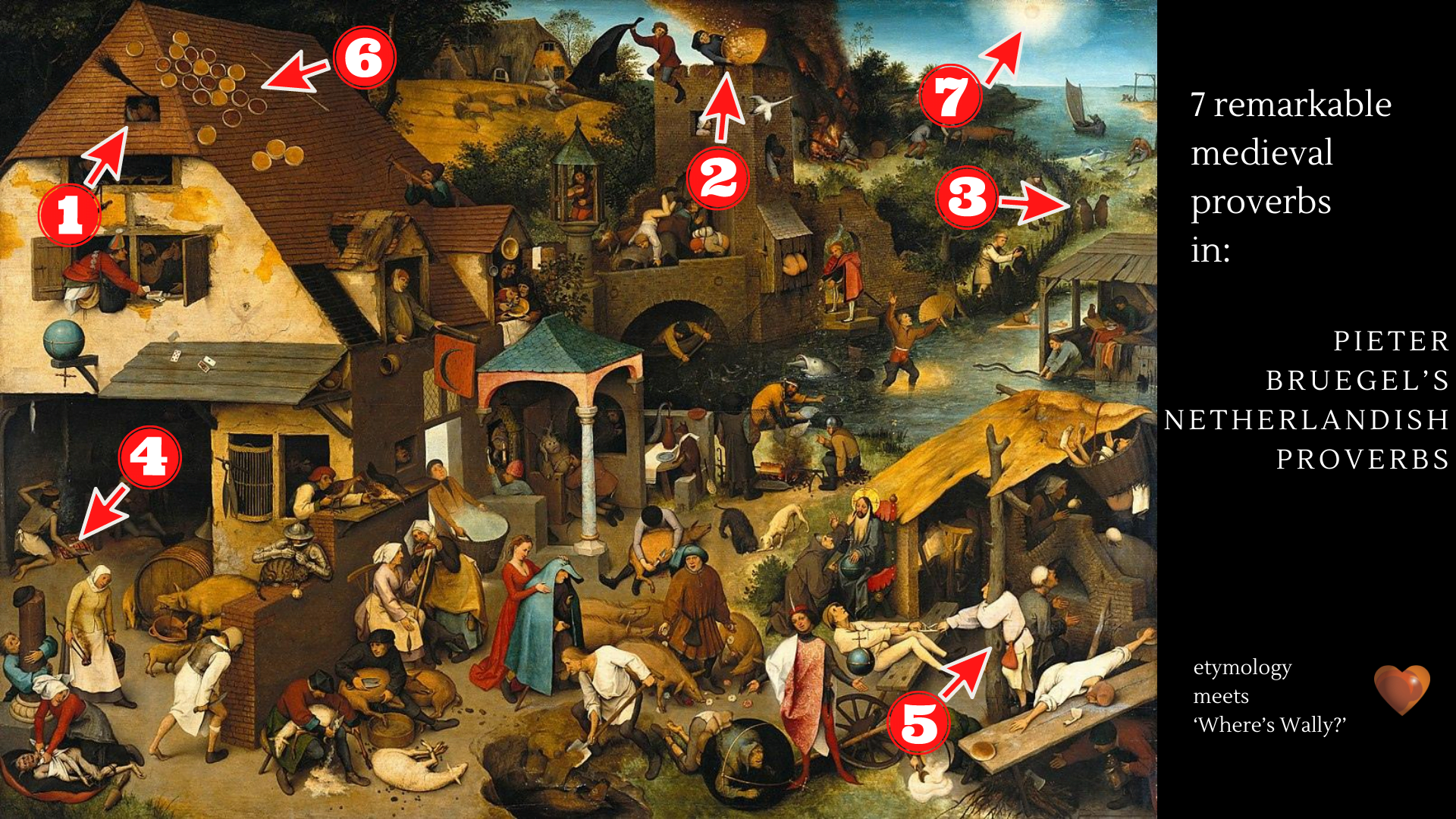 This painting contains over one hundred different Dutch proverbs. You could describe this painting as a medieval version of ‘Where’s Wally’, only with proverbs instead of our stripy friend.

Being the language dorks we are at Ludejo, we love everything to do with language: proverbs, malapropisms, blend words, the whole shebang. It won’t come as much of a surprise, then, that we greatly enjoy scrolling through Twitter. (We’ll just go ahead and forget the fact that some people think of this social media platform as a sewer.) Twitter is home to many fun and remarkable language facts. (Tip: @UselessEty is a fun English account if you’re into etymology.)

The ‘Where’s Wally’ of the Middle Ages (but with proverbs)

A little while back, I was browsing through Twitter (I had already filled my daily Netflix quota by then), when I stumbled upon a post by @qikipedia. The post was about the painting Netherlandish Proverbs by Pieter Bruegel the Elder, a painter from Brabant. This painting contains over one hundred (!) different Dutch proverbs. You could describe this painting as a medieval version of ‘Where’s Wally’, only with proverbs instead of our stripy friend.

Anyway, my point is that the painting is a creative way of displaying an impressive collection of Dutch proverbs and sayings that were common during Bruegel the Elder’s lifetime. A pretty neat example of visual communication in the Middle Ages. Some of the proverbs depicted on the painting are still used nowadays, such as ‘achter het net vissen’ (literal translation: ‘fishing behind the net’; meaning: missing out on something). Others have been forgotten over time, which is a shame if you ask me, someone who greatly appreciates proverbs. (Blend words are even better, but even when they’re used correctly, they can usually get my approval.)

I thought it might be fun to highlight some of the less well-known proverbs and expressions. And so, I selected a few to elaborate on in this blog. If you’d like to look at the painting while we go through the proverbs, check out an interactive version of the painting here.

And now, for the moment we’ve all been waiting for, seven proverbs and expressions from way back when.

‘Onder de bezem getrouwd zijn’ (literal translation: ‘to be wed under the broom’) means to live together without being married. There used to be a huge taboo against that, but nowadays I’d say it’s considered to be pretty normal.

A literal translation of this one would be ‘to toss feathers in the wind’. It means doing something without giving it much thought.

In English, this would be something along the lines of ‘wild bears prefer each other’s company’. This one refers to the idea that peers get along better with each other than with outsiders.

To do a lot to achieve little (literal translation: ‘to fry the whole herring for just the roe’). Did you know ‘roge oft kuyt’ is an expression in itself? Nowadays the Dutch would write ‘hom of kuit’, in which case the literal English translation would be ‘milt or roe’. This expression is apparently used in situations in which someone wants more clarity about something. So something like: ‘Are you coming or are you staying here? Milt or roe?’ Wonderful. Not the most appetising expression on the painting, if you ask me. According to Merriam-Webster Dictionary  ‘milt’ refers to ‘the sperm-containing fluid of a male fish’. As I said, wonderful. And ‘roe’ refers to fish eggs.

‘Love is wherever the money bag is’, or in other words: love can be bought.

‘Their roof is covered in pies’, meaning they are very wealthy. Probably not the most sustainable form of roofing, but if you’ve got money to spare … Nope, even then it doesn’t seem like a good idea. I wonder if the rich folks would have to change the pies after a couple of days so their roof always looks tasty and fresh. Or have someone do that for them, since apparently they’ve got the money. It also sort of sounds like a low-budget version of the house in Hansel and Gretel. Whoops, let’s get back on track.

This one’s a little tricky to translate, but I’ll go with ‘No matter how finely spun, everything eventually falls under the light of the sun’. Ooooh, it still rhymes. And it means that the truth always comes out.

Well, those were a few examples from Pieter Bruegel the Elder’s Netherlandish Proverbs. I wonder if anyone would be able to deduce every proverb on that painting without all of the tools you can find online. Who knows, maybe you could give it a try when you’re fed up with watching Netflix some time.