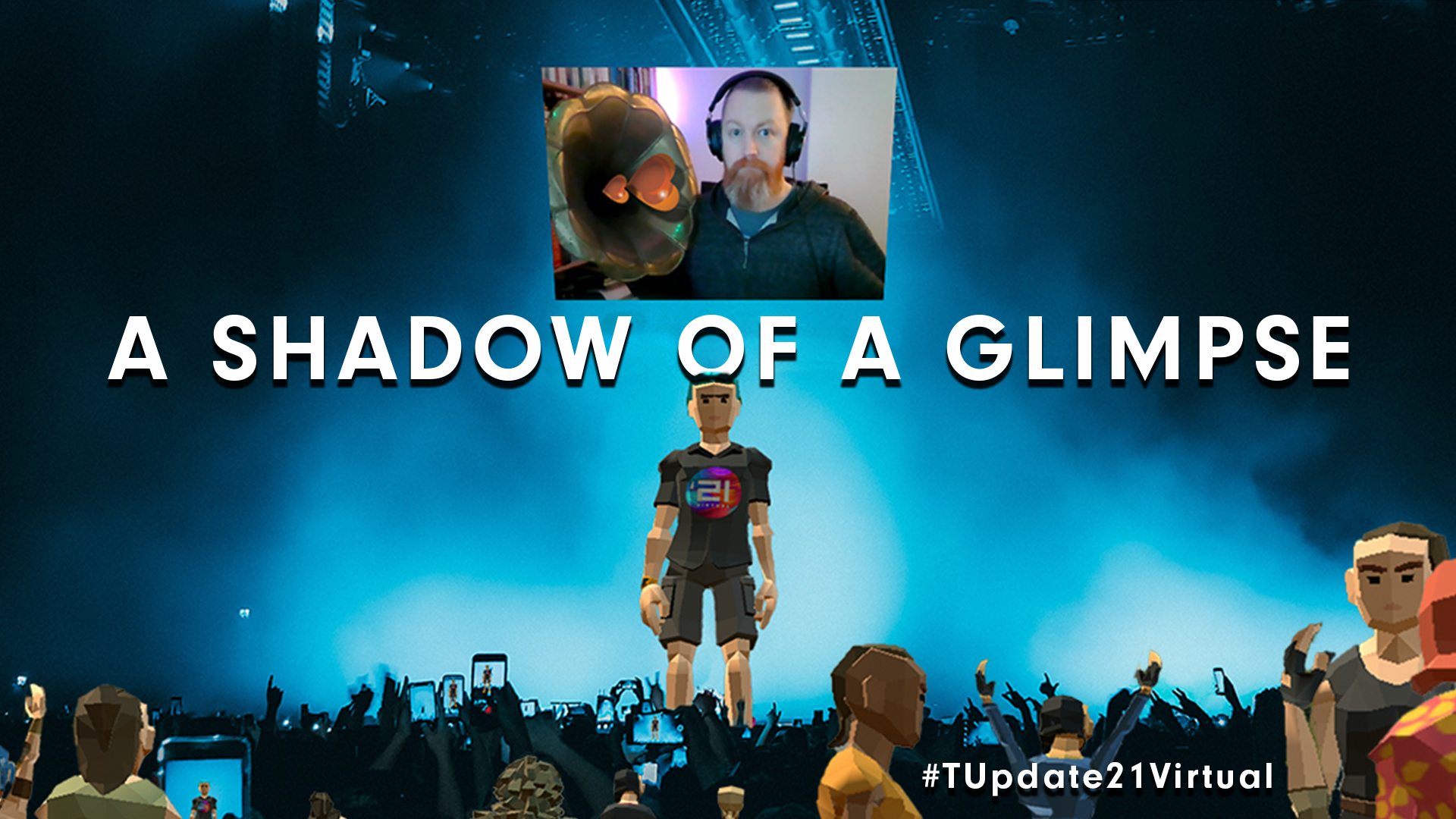 It’s been a couple of weeks since #TUpdate21Virtual took place. We have all moved on with “regular work”, and it’s taken me some time to gather my thoughts on the conference. So here goes…

I haven’t enjoyed the pressure to get involved – to stay visible – over the last year and a bit. I was overwhelmed by all the options for virtual events – it felt like a bit of feeding frenzy for a while. I attended a couple of conferences last year. While it was nice to see many familiar faces, there was an air of melancholy around the events. Conference organizers have been in an impossible situation. You could see that so many people had invested so much time into finding a solution for the world we were in… but it just reminded me of what we were missing.

We spent most of last year looking inwards, here at Ludejo.

Ambassadors for a virtual conference?

In January, Marta Aragão asked me if I would be interested in becoming an ambassador for #TUpdate21Virtual. I hesitated. Part of me just didn’t see the point of online conferencing.

My first conference in the localization industry was the T-Update in 2015, in Manchester. It was held at Old Trafford, the home of Manchester United. Now, I’m not necessarily a Man Utd. fan – growing up I always supported the team with the most Irish players – but it was really cool to walk into Old Trafford for work!

And I was there for work. I took that responsibility seriously. I (somewhat cautiously) attended the official conference dinner. I had 1 or 2 glasses of wine. I engaged in a little small talk with the people at my table. As soon as the dinner was over, I went back to my hotel. I was in bed by 10.30. Because I was at work. I was representing my employer. I needed to be bright-eyed and bushy-tailed in the morning…

During the second day of the conference I started overhearing bits of stories. Rumblings about another reality. A hidden level that I hadn’t accessed. Talk of shots. Shots?!

“Did you buy that last round?”

“That shot nearly killed me…”

“I was so rough this morning”

I spoke with a few people that day who regaled me with tales of dancing, drinking, and debauchery.

My innocence was shattered.

I had attended a good conference. In a great location. But I left with the feeling that I had missed out. Or more accurately, I left feeling I had been voluntarily negligent. I had followed the entire conference program, but I knew I had only experienced half a conference.

I went to New York in early 2016 for GALA, determined to be in the middle of anything that was happening. And that is how I have approached every conference since. The connections that are made at these conferences are special. The networking opportunities are vital. It’s all well and good to swap business cards, or share a few words about what services your company offers. But that’s all superficial. We can do this on LinkedIn. I want to know who you are. What’s your story?

Standing around the coffee tables in the exhibition hall. A few sore heads floating around. The morning after the night before. Glances exchanged. Knowing looks. Draw a deep breath and puff the cheeks. Laugh through the pain.

“Were you still there at the end?”

Is this the future?

I got into a discussion with a group of attendees during #TUpdate21Virtual. We were debating/predicting the future for conferencing in the localization industry. Are there too many conferences? How do you avoid FOMO (Fear of Missing Out)? Wouldn’t it be better to roll all the conferences into 3 or 4 events each year?

I can’t talk for anyone else, but my answers were;

Every conference I have attended has given me something. I have learned something everywhere. And I have made real connections everywhere. When I was lucky enough to go to a conference (in the before times obviously), I would commit to it. I’d go all in.

If you can take 1 thing away from a conference, it will have been worth it. But it’s a two-way street. The people who organize conferences put a huge amount of time and effort (more often than not as unpaid volunteers) to try to guarantee the success of their event. Of course there will be competition. In my experience, every conference can be amazing. So much of the success of an event comes down to the people participating.

Marta and the board of the EUATC made a decision early in the organisation of the #TUpdate21Virtual. They gathered a group of people from across the language industry to act as ambassadors. As ambassadors we received an entrance ticket to the conference. The EUATC got a sounding board to bounce ideas off.

Launching a virtual conference on a platform which looked like a cross between The Sims and Minecraft (so I’m told) was a big gamble. People don’t like change. We are averse to it.

From mid January until the conference 2 weeks ago, Marta, Radka and Geoffrey would meet with the ambassadors once a week. Each week we were given updates on the progress that was being made with the conference and the platform. Each week we would stumble through many of the issues that would need to be addressed before the conference. Each week Marta and Radka would display the patience of Job with us. The work they put in to make this event a reality was awe-inspiring. I am very grateful to have been able to witness it up close.

The program that was put together for #TUpdate21Virtual was really strong. There was a wonderful mix of new voices with exciting stories and experienced industry leaders who opened themselves up to questions from experts. (Konstantin was in his element being grilled, but let’s be honest, he was barely singed!)

I have to hold my hands up here, I spent most of the conference appreciating the event “from backstage”. I was so impressed with the production value of the event. The guys from Confer-O-Matic deserve huge credit. The live editing work during panel discussions (cutting the camera feed between different participants in the debates) was remarkable. Special words of congratulations need to go to Heike Leinhäuser, Geoffrey Bowden, and Marta Aragão who had the unenviable task of keeping the conversation flowing when there were little or no questions from the audience.

Did it go off without a hitch?

Did it go off without a hitch? No, of course not. No conference ever ends without something going wrong to one degree or another. The team from Plunet spent the event with either no audio or no visuals. I can’t imagine how frustrating this must have been for them. I did get to meet Peggy Grafe from Plunet because of the glitch – so I call that a win! The whole team from Plunet handled the technical issues as professionally as you’d expect.

There were people who seemed frustrated by the platform, and there were people who openly voiced their frustrations. This wasn’t unexpected. Like I said earlier in my sweeping generalization, people don’t like change. There is also a fear of being made to look silly. I had the benefit of being shown around the platform in different guises for a couple of months before the conference. It did take people varying amounts of time to get comfortable in the world. People tried different ways to maintain visibility on the platform. Some people made noise. Not all publicity is good publicity. On the other end of the scale I was so impressed by Josef Kubovský from Nimdzi, and Christine Xaysakda and Anna Kozubek from LBS Suites. If you want to know how to make the most of any conference (online or offline) there are free master classes out there. All you have to do is watch them.

What did I get from it all?

I feel strong emotional bonds to the events I have attended in the past. Each one was special for its own reason. Each one has a story. Or many stories. Each one has either brought new people into my life, or brought me closer to some of the people I knew already. I love each of them for the experiences they were.

#TUpdate21Virtual did something I could not have predicted, even with all the time we put in as ambassadors. After the official #TUpdate21Virtual program had ended, we danced, we drank, and we dabbled with debauchery. When everyone from the organisers had gone home, we still had people who were willing to hang out, for hours and just share a moment.

The music had stopped.

The bar had closed.

The staff had gone home.

But we were still there.

It was a shadow of a glimpse of the conferencing life we all miss, but my god it was so good.

That is what I am taking away from #TUpdate21Virtual.

The conference may have been virtual, but the connections were real.

Massive shout out to my fellow ambassadors!

Deepest respect to the board of the EUATC and Geoffrey Bowden

Geoffrey and Marta concocted the idea of a pet’s of the localization industry fundraiser. It would not have been possible without them. Thank you for involving me, and thank you for the support! If you want to read more about the Best in Show fundraiser for Translators without Borders, Geoffrey has put it better than I ever could here: