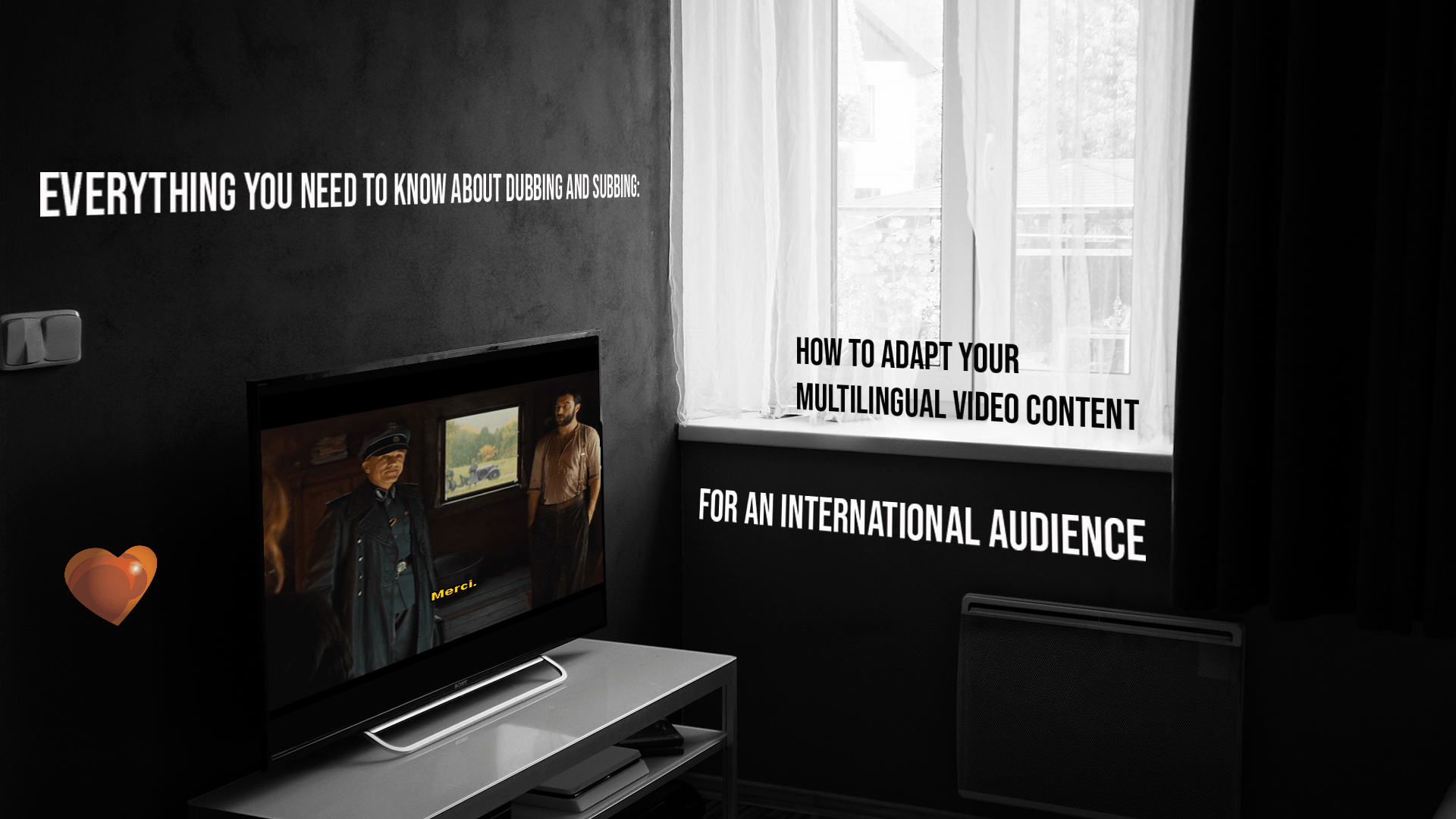 Everything You Need to Know about Dubbing and Subbing: How to Adapt Your Multilingual Video Content for an International Audience

There will always be a whole lot of obstacles to keep in mind if you’re aiming to translate or localise multilingual video content. Before I delve into the world of hurdles and obstacles you need to overcome (or avoid) during the translation process, I’d like to start with some background info about dubbing and subbing.

How do you go about deciding what is the correct choice for the translation of your content? That choice depends on a wide array of factors, one of them being the target audience. Who exactly are you trying to appeal to? Is it a translation for the Dutch market? Or do you want your content to be made available to a German-speaking audience? In the Netherlands, non-Dutch video content  meant for a Dutch audience is often fitted with subtitling. Dubbing isn’t particularly popular in our neck of the woods. If the average Dutch person were to go see a film in a local cinema, they’d be quite confused if the audio track was dubbed. In the Netherlands, we not only recognise popular international actors’ and actress’ faces, but we’re also familiar with their voices. To us, Brad Pitt sounds like, well… Brad Pitt. Not like some Dutch guy called Henk.

The only exception to this unspoken rule would be films and shows for children. Quite understandable, I’d say, since the intended audience probably isn’t able to keep up with or even just read the subtitles.

Since we’re not particularly accustomed to dubbing in the Netherlands, it doesn’t come as much of a surprise that we aren’t as familiar with the complexity of the process. Dubbing is more than just translating a new batch of audio files. Eventually, after being recorded, the translated text should match the way the original actors and actresses move their mouths. And that’s just one of the many aspects you need to consider while producing a dubbing track. Just think of the characters’ voices and accents. A voice that doesn’t fit the character can ruin the entire watching experience. And besides, would Batman still be as convincing a superhero if he’d sound like a squeaky kid from the midwest?

I highly doubt it.

In sum, an important aim when dubbing video content is to create the illusion that the dubbed language was being used by the actors during filming. If that doesn’t seem to be the case, it’ll affect the believability of the story (or the speaker).

We have access to casting agencies. Agencies specialised in finding the right voice for the job. These agencies have an extensive database of professional voice actors and actresses. Here at Ludejo we only work with professional voice talents who can quickly get started on recording audio tracks.

So, if finding the right voice isn’t the biggest problem and translating the text isn’t either, what makes localising multilingual video content for an international audience so difficult? The real challenge lies in the combination of different languages. Content in which multiple languages alternate and which demands that their audience switches between subtitles and dubbing. A great example is Quentin Tarantino’s 2009 film Inglourious Basterds.

In 2010, the French magazine Meta: Journal des traducteurs (Translators’ Trade Magazine) published an article on the obstacles translators might be confronted with when tasked with localising Quentin Tarantino’s Inglourious Basterds. The author of the article, Nolwenn Mingant, argues that it would be impossible to translate this film without negatively impacting the story. This was not only the result of the various different languages being used throughout the film, but also because language plays an important thematic role.

For instance, the film contains a scene in which German colonel Hans Landa is having a conversation with a French farmer by the name of Perrier LaPadite. While they start their conversation in French, they quickly switch to English. Why, you ask? Landa knows that LaPadite is hiding Jewish refugees and thus wants to ensure that the refugees cannot understand what is being said.

How on earth are you supposed to localise this scene for a French-speaking audience without messing up the storyline?

Well, the translators responsible seem to have found a neat solution. First, they altered Landa’s excuse to switch to English. Originally, Landa states that he’d rather speak English because his French isn’t good enough. In the French dubbing track, however, the colonel says he’d like to switch to English “for the sheer pleasure of it”.

For the original English-speaking audience, the dialogue between Hans Landa and Perrier LaPadite goes as follows:

“I regret to inform you that I have taken my mastery of the French language to its upper limit. Continuing to speak so incorrectly would only embarrass me. However, I believe your command of English is quite satisfactory, is it not? (…) Since we are in your home, I am asking your permission to switch to English for the rest of the conversation.”

Then, there’s the same scene, but localised for the French dubbed version:

“I must say it is always a great pleasure for me to speak Molière’s tongue. I may however switch to English in the course of our discussion, for the sheer pleasure of it, and you will follow me. However, I believe your command of English is quite satisfactory, is it not? (…) Since we are in your home, I am asking your permission to start in French and switch to English later.”

And this is only one of the scenes in Inglourious Basterds where the use of different languages causes trouble. (If you’re interested in some more examples, check out Nolwenn Mingnant’s full article.)

In short, I believe the translators who worked on translating, localising and dubbing this multilingual project deserve high praise. Clearly, the uphill battle that is translating and localising multilingual video content is steeper than you might initially think.