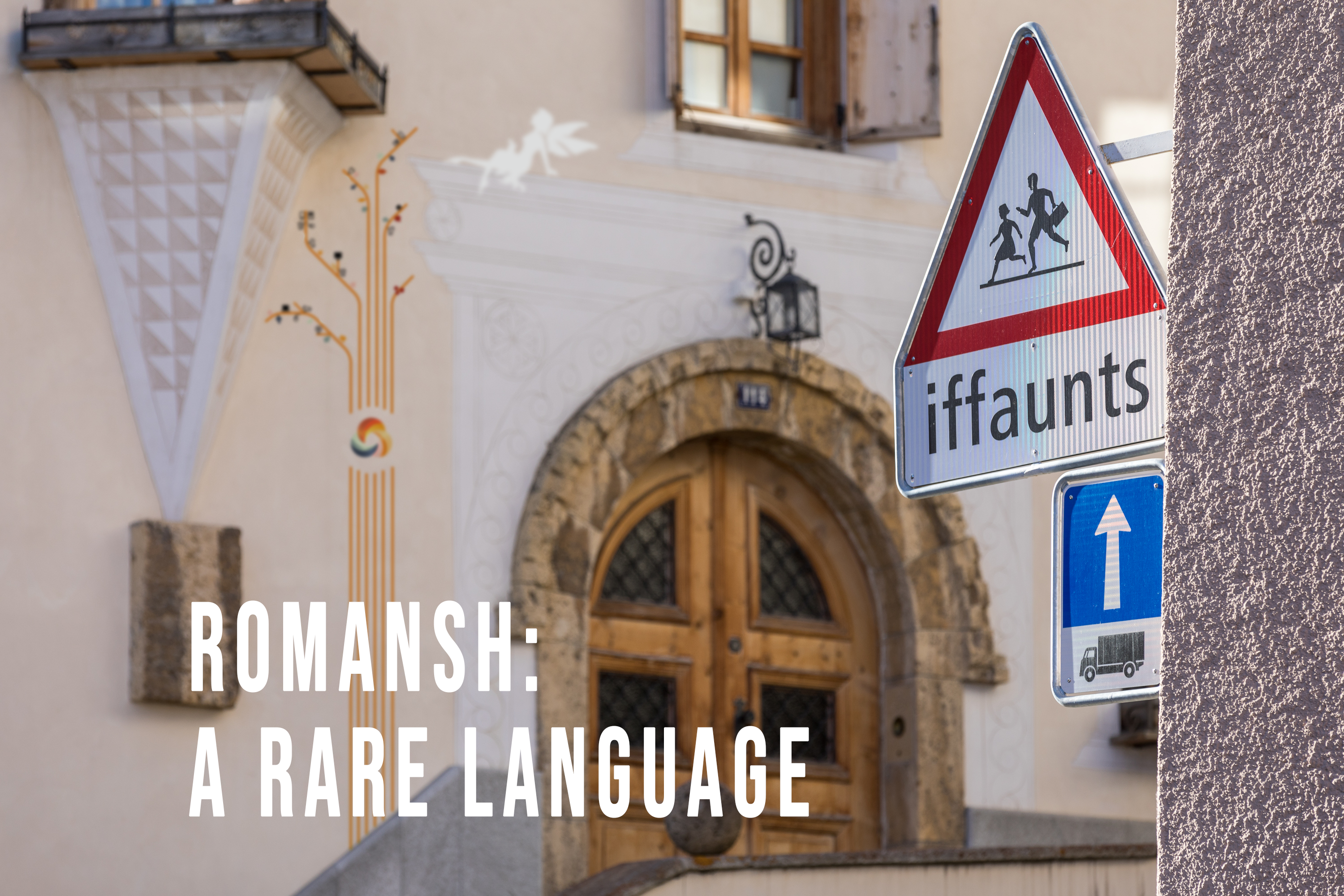 A while ago, Ludejo travelled to Switzerland to explore the four different national languages. The language that struck us most was ‘Romansh’. Why? It is well known that German, French and Italian are spoken in Switzerland, but the fourth language, Romansh, is not that widely known. Actually finding someone who speaks the language is a bit like looking for a needle in a haystack, but the language is nevertheless alive and well. You notice that the descriptions on most packaging in Swiss supermarkets include Romansh, for instance, and Swiss people talk about this almost mythical language in a novel way. In this article, you will learn more about this special language.

Where did the Romansh language originate?

Romansh has its roots in Latin. It is part of the Romansh language family and has strong similarities to Ladin and Friulic, two languages spoken in northern Italy. Did you know that there are no less than five dialects of Romansh? They are known as the Valland, Puter, Surmiran, Sutsilvan and Sursilvan dialects.

Romansh originated in the Swiss Alpine canton of Graubünden, where it is still spoken today. Among the nearly 8 million Swiss, Romansh is the predominant language for about 35,000 people. Romansh is therefore only spoken by 0.5% of the Swiss population, and almost exclusively in Graubünden. Despite having a population of only 187,000, Graubünden is the country’s largest canton.

Standing together for Romansh

At the turn of the 20th century, it seemed that Romansh would not survive, but in 1919 the Lia Rumantscha (Romansh Federation) was founded. Most of the Swiss wanted to preserve the language. In 1938, Switzerland therefore recognised Romansh as a national language, conferring the same status as French, German and Italian. The Swiss Confederation subsidises the Lia Rumantscha about €3 million a year to keep the language alive. About half of this money goes towards translating textbooks into the five dialects of Romansh.

The ‘Rumantsch Grischun’ was established about 40 years ago, which is a standardisation of Romansh that merged the five dialects and established formal grammatical rules. The aim was to create a language that could be understood and used by speakers of all five dialects. The intention was good, but the initiative did not go down well with the speakers.

Even today, there is no political party in Switzerland that supports or further recognises Romansh. The current minister of economy and tourism for the canton of Graubünden, for example, is himself not in favour of the language and considers the promotion a waste of time and resources. The one thing that has withstood the test of time is the fact that Romansh is still used in schools in Graubünden, where lessons are taught in both Romansh and German.

Given that Switzerland has four national languages, any company seeking to increase its market share in this country should be able to communicate in at least the three main languages: German, French and Italian. This means that translation is a daily necessity. German and French are widely spoken in most cantons, while Italian is considered a minority language that is only spoken in the cantons of Graubünden and Ticino.

Most Swiss people have no difficulty understanding at least one other national language. When it comes to written documents such as websites, catalogues, contracts, technical manuals for translation, etc., however, a professional translation is a must, especially if the target or source language is Italian. As a matter of fact, the Italian spoken in Switzerland is also not quite the same as the language spoken and written in Italy.

Your first words in Romansh

The Swiss often speak a fair bit of English too, so as a foreigner you normally would not have any difficulty to communicate with them. All the same, it is always nice to learn a few words in a foreign language. If you are planning a trip to Switzerland yourself, we highly recommend learning a few simple phrases in (Swiss) German, and while you’re at it, why not also learn a few in French and Italian too! You might even feel like learning a little Romansh after reading this article. This list of everyday Romansh words and phrases will help you get started!

In this article, we told you all you need to know about the Romansh language, which is unknown language for most people. You’ll have something interesting to say during your next raclette and wine evening and Switzerland will hold one fewer mystery for you!